Home Projects People Contact Us
HAVENS, from Karantina to other neighborhoods 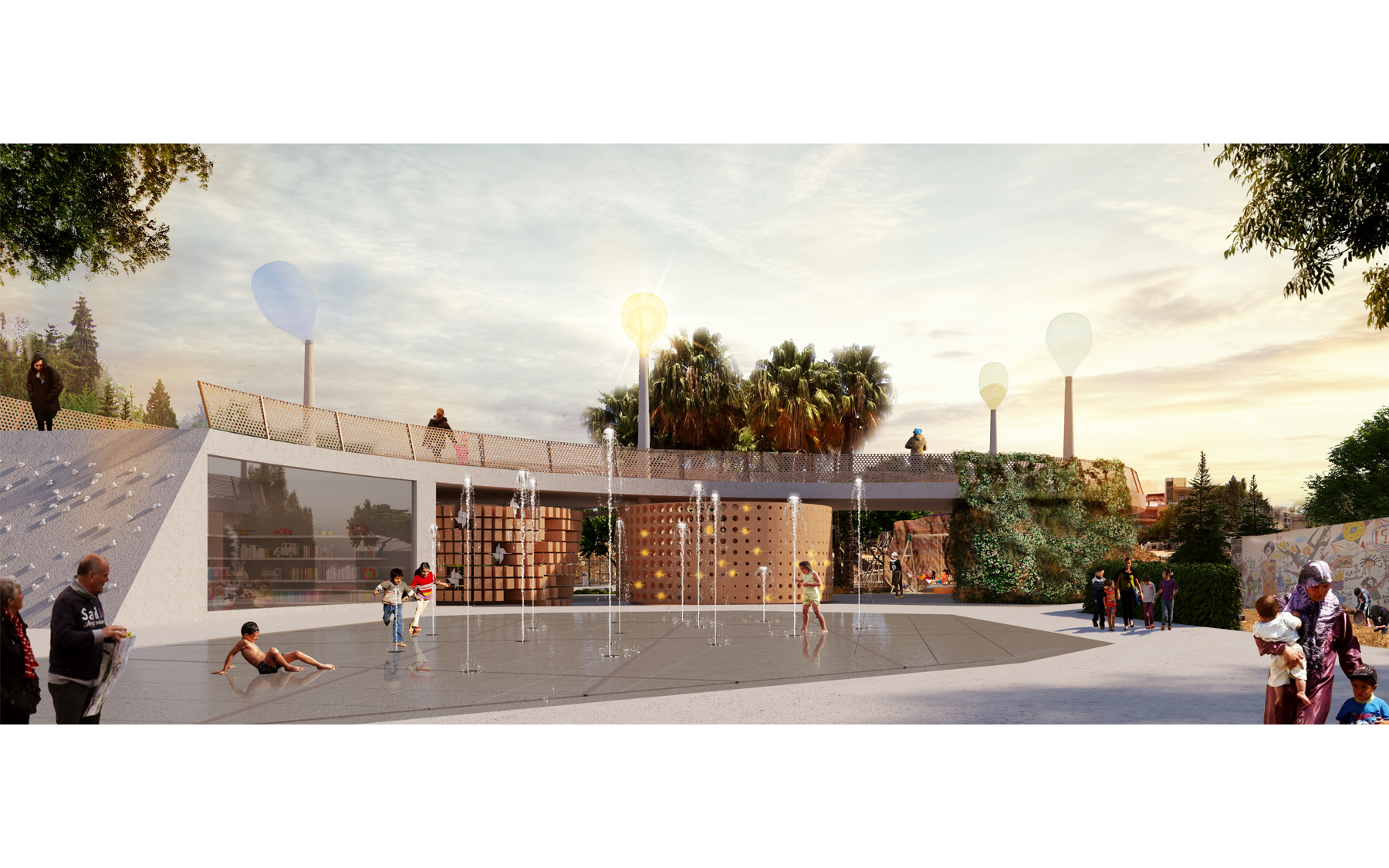 Karantina echoes with marginalization, garbage, smell, slaughterhouse and political turmoil. It is thus important to think about Karantina Park in terms of its perception as well as its presence in the urban landscape. For this purpose, we propose a participatory approach for the project through which we seek to relief the local community. In contemporary urban practices, notions such as sense of place and site-specificity have been reintroduced as leading concepts in landscape and parks design. Our proposal is in favor of these notions and calls for making accessible shared spaces taking into account the experience on the ground. It is based on reading the different layers, meanings and stories on and around the site which can be revealed, reconstructed and eventually slightly altered to travel beyond it.

The project consists of putting forward four types of ecosystems stimulating for the senses and adaptable by nature instead of proposing a final product on the site. Rather than imposing our intent through a fixed aesthetic, the aim is to provide an adaptive understanding of a public space for Karantina's inhabitants to develop their own patterns and practices.

Inspired by the existing microclimate under the palm trees and abstracting pleasant and/or familiar existing conditions in the city, we are proposing to implement four havens: The Wind, the Light, the Sand and the Green. The intervention focuses on engaging the local community in the making of the ecosystem, the maintenance of it and its dissemination in the Karantina Park and beyond. 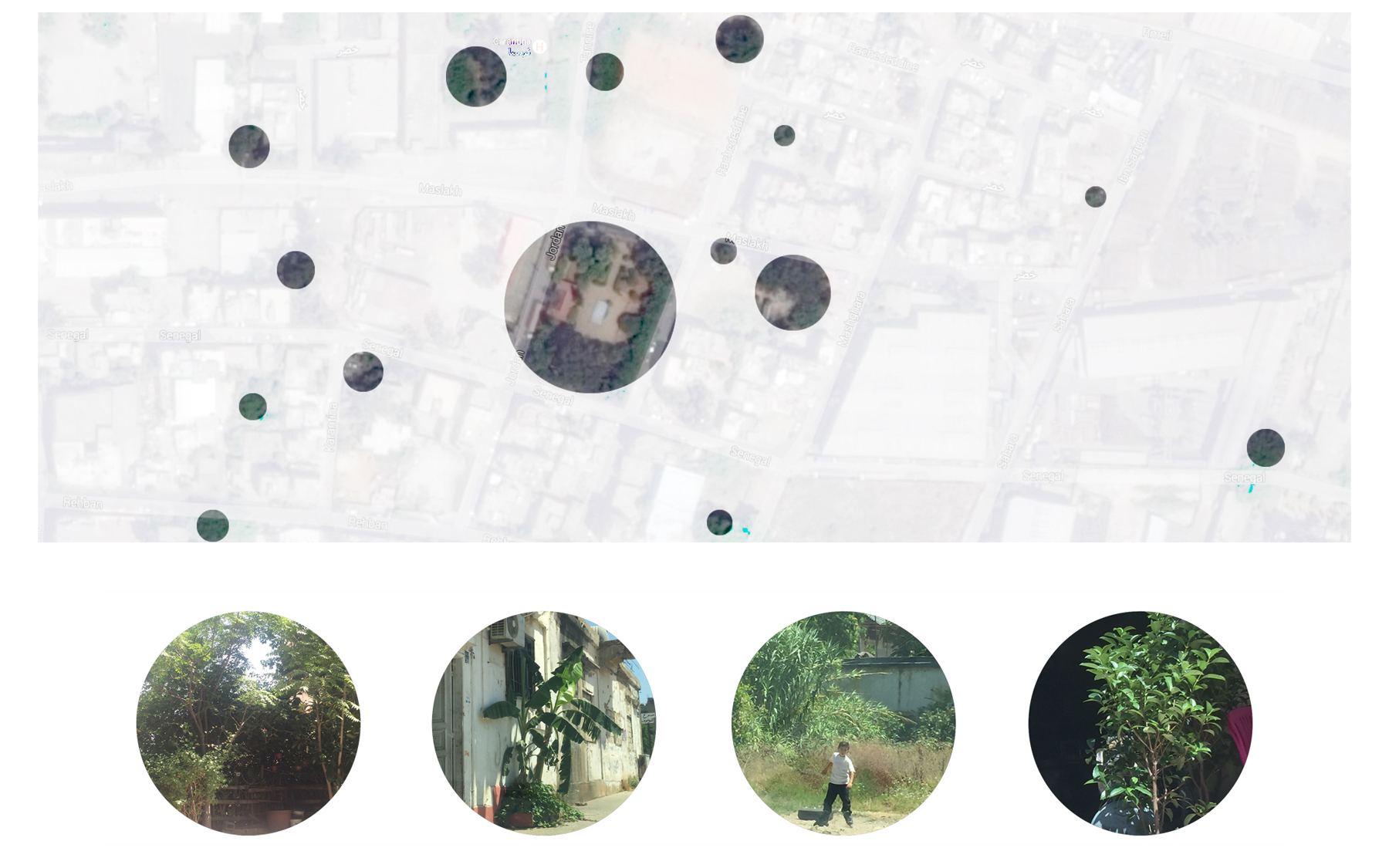 While being aware of the need to be more environmentally sensitive, our four interventions propose a concept that incorporates earth structures, energy efficiency, raw and local materials, vegetation and natural greenery coupled with educational tools and games for the kids to get them better acquainted with their environment and the importance of protecting it. The perfect combination between ecology and human interventions and activities is key to the sustainability of the project. The notion of sustainability grows beyond the activation of the four totems on top of the poles. The spaces are all made of one material, earth, but are built following different construction techniques. The earth structures and the different spatial qualities they propose will create environmental awareness and understanding. 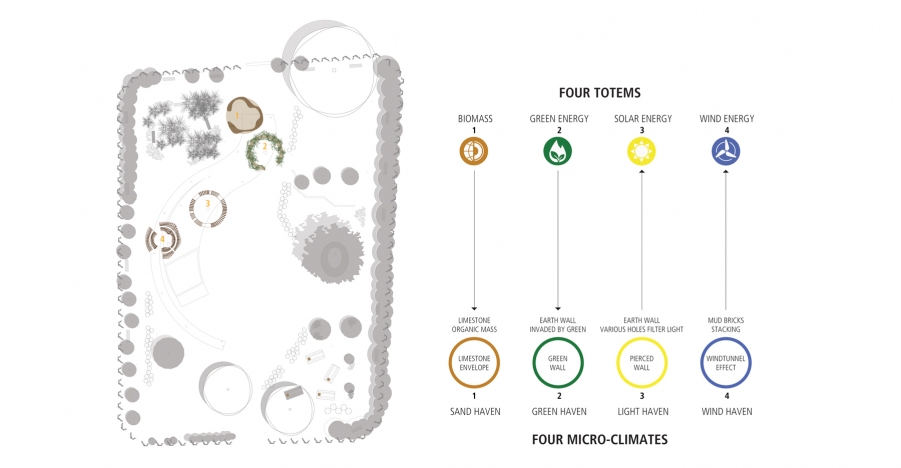 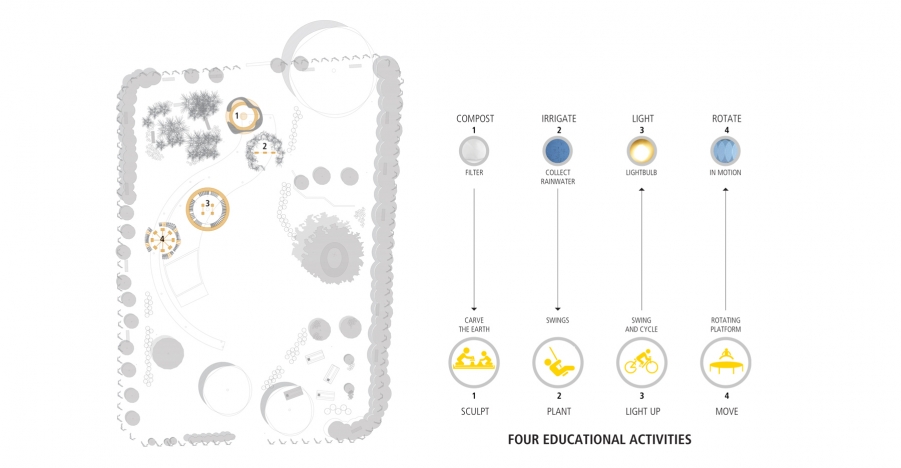 The Wind Ecosystem is characterized by a regular stacking of compressed earth blocks occasionally mutated to incorporate popular paper windmill flowers activated naturally to create windy breeze and refresh the Wind Haven. On the inside a turning swing will in turn activate the totem using the mechanical energy produced by the kids.

The Light Ecosystem is characterized by a rammed earth wall perforated to infiltrate and diffuse different lights throughout the day and lit at night using the energy saved from the kids cycling. The totem will also be lit indicating the energy saving during the opening hours of the park.

The Sand Ecosystem is characterized by a huge sandy rock sitting in a pool of sand and carved to allow kids inside it. Those type of sandstone are available everywhere in the North of Lebanon. The soft rock will morph and get eroded as kids will climb on it,carve out smaller pieces or disintegrate part of it into soft powder to fill the sand box and produce from it colored sand paint. The totem on top acting like a sand clock will be filled daily with the produced sand representing the size of the erosion through running time.

The Green Ecosystem is characterized by a sustainable green wall of earth held with wire frame allowing indigenous species to grow as well as suitable climbing plants. The walls will be irrigated through the collected rain in the totem in winter time and the grey water collected from the existing park irrigation system. 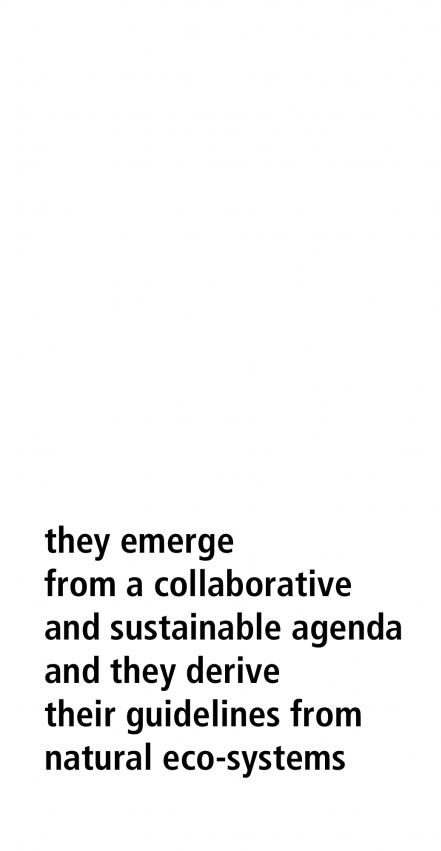 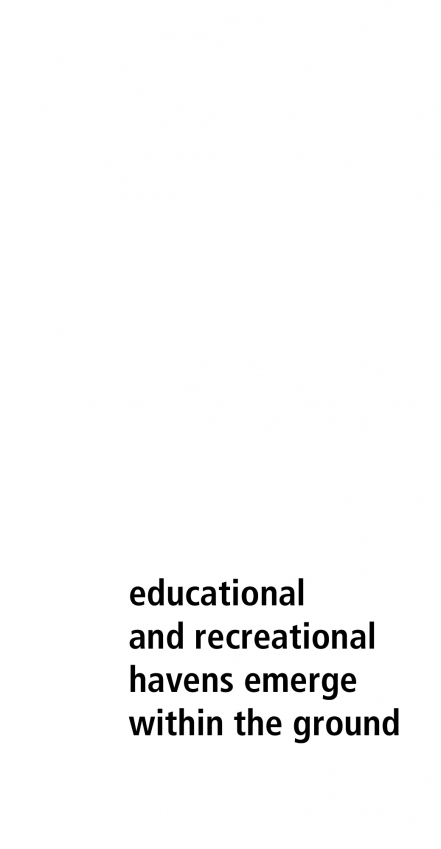 The first step towards the appropriation of the four Ecosystems by the community would be to involve the locals in the process of the making rather than delivering a ready-made product they might feel alienated towards. It is a participatory approach with an educational edge converting the landscape for children into a soothing haven for them to experiment with a whole array of different transformations from playful elements to productive energies. 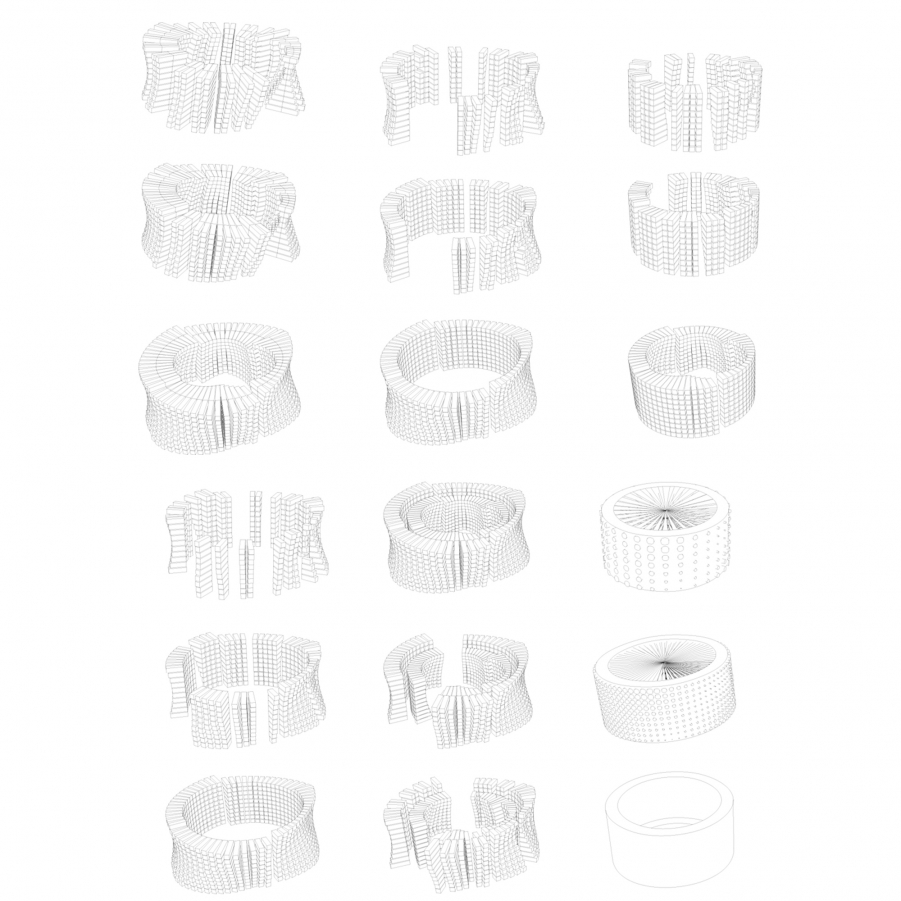 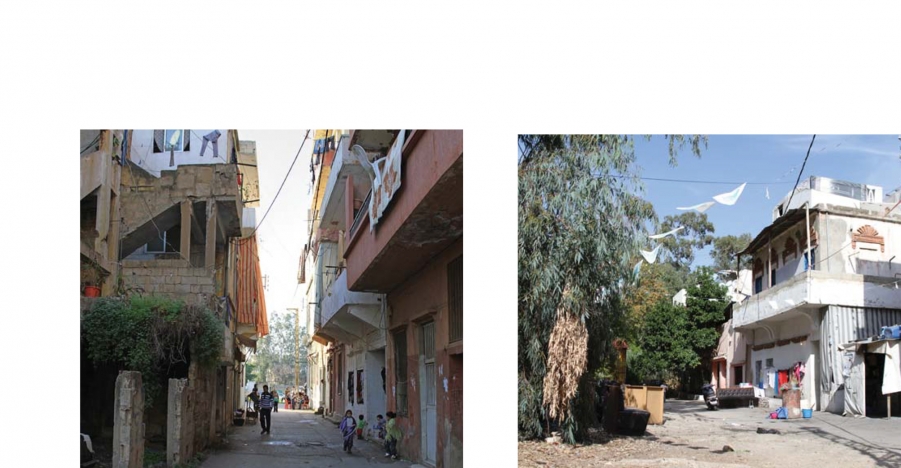 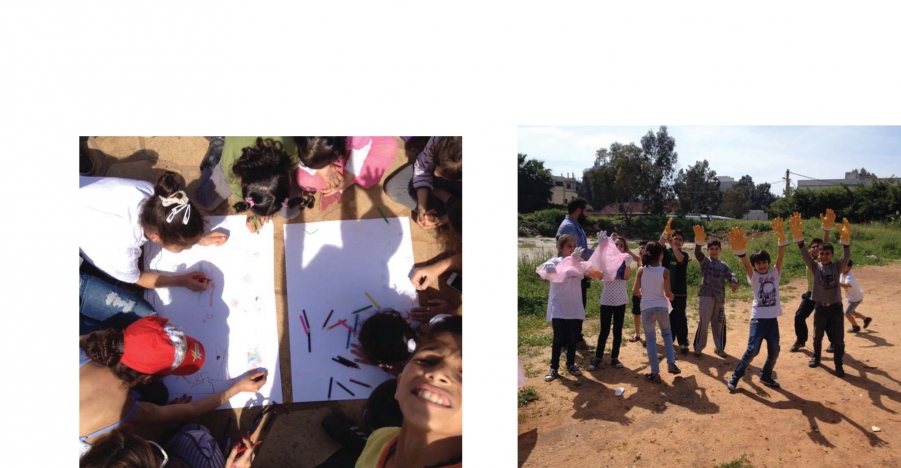 This first intervention in Karantina Park is expected to act as a catalyst in the city. We envision it implemented in several neighborhoods to create spaces of refuge and raise awareness in order to stimulate desirable and positive change.